Sea turtle in the Galapagos Islands

The Galapagos Islands are renowned for unique wildlife, inspiring scenery, and vibrant colors. The natural splendor is enhanced by the tropical climate that has helped shape the landscapes of the individual islands. The region has become emblematic of biodiversity with sweeping panoramas leading to famous Blue-footed Boobies or barking sea lions and crystal-clear waters, giving you a view of green sea turtles. Depending on your travel goals, this guide can help you determine your best time to visit the Galapagos. 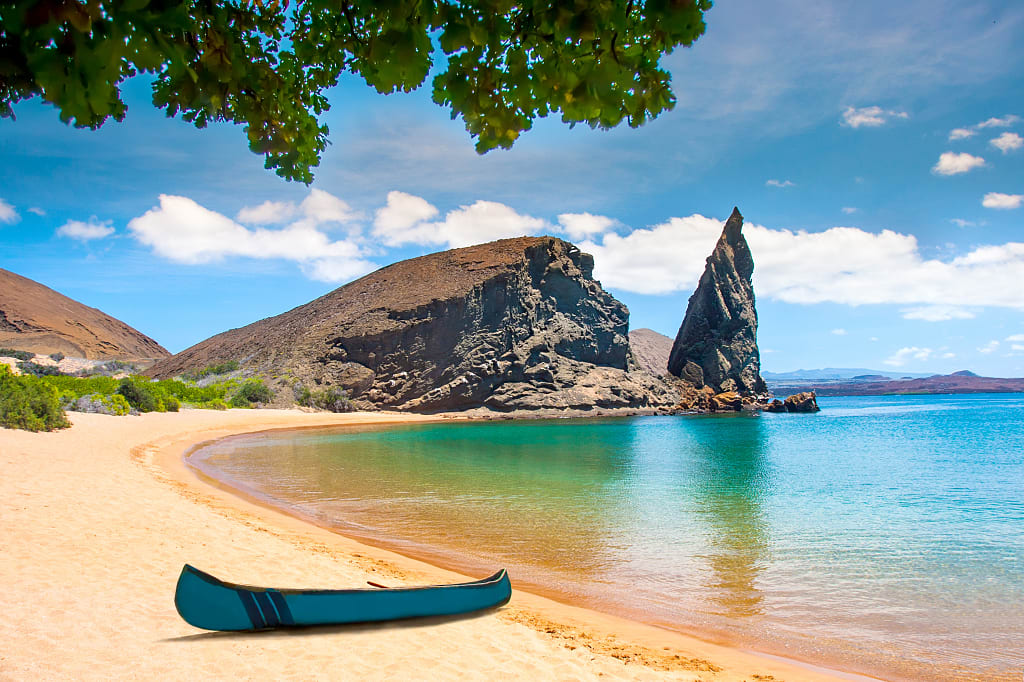 The Galapagos are dynamic and unique all-year-round but between December to May offer the best combination of the weather, sea conditions, and wildlife viewing. The rainy season is an ideal time to experience the calm waters that support the active wildlife and allow for great adventures like hiking or kayaking. These are also the best months for you to take a cruise to visit multiple islands. The climate varies between the two seasons but between December to May is generally warm and wet.

Get Weekly Inspiration and Expert Advice on Travel

during the COVID and post-COVID era

Best Time to Visit by Season 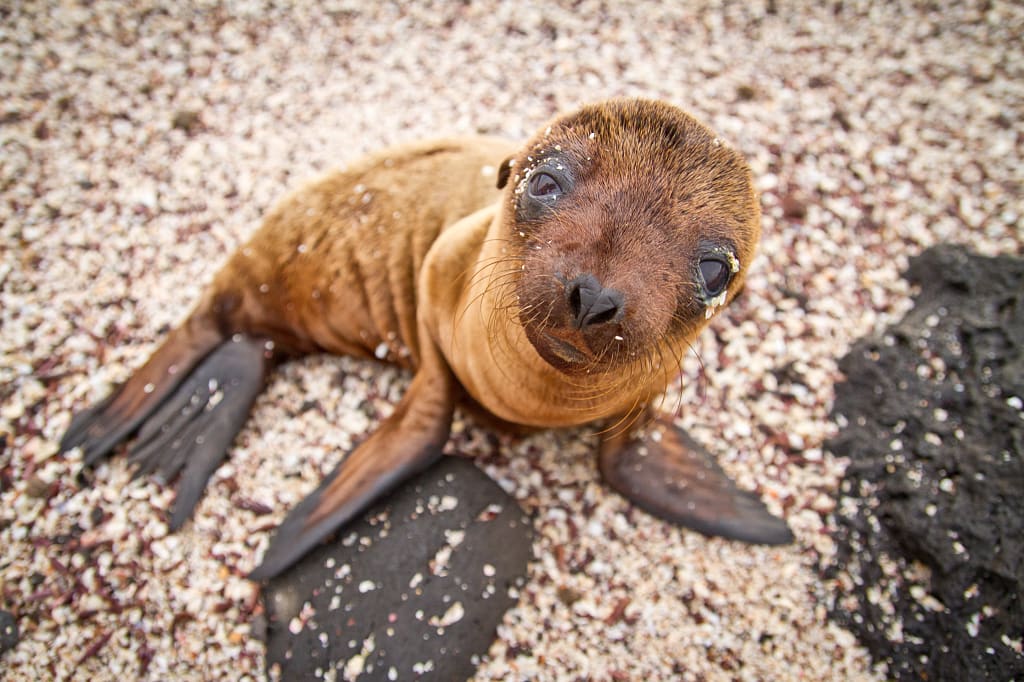 The Galapagos Islands straddle the equator giving the archipelago a relatively tropical climate with two seasons instead of the typical four. It also means the islands are scattered, with some in the Northern Hemisphere, some in the South Hemisphere, and even Isla Isabela and Volcan Wolf landing on the equatorial line. Truthfully, every month in either the dry or the rainy season has its merits and captivating possibilities for you to experience, but this list gives you some pointers for the best months to visit based on your travel goals.

The climate in the Galapagos is much cooler in the dry season and creates an excellent breeding environment for the wildlife, especially between September and November. This is one of the best times for wildlife viewing because of the newborn animals, and the wealth of food that supports the new-found crowds of wildlife around the islands as the strong seasonal current brings swarms of small fish and plankton to the surrounding waters.

The rainy season is a fantastic time to visit the Galapagos Islands, especially between February and May. The weather is typically warm, the waters are much calmer than in the dry season, and the mixture of moisture and heat coincides with the sea turtle and sea lion mating season. Beyond the animals, the weather also brings life filled with color across the islands as flowers blossom blossoming against the crystal-clear Pacific Ocean.

Best Time for a Cruise 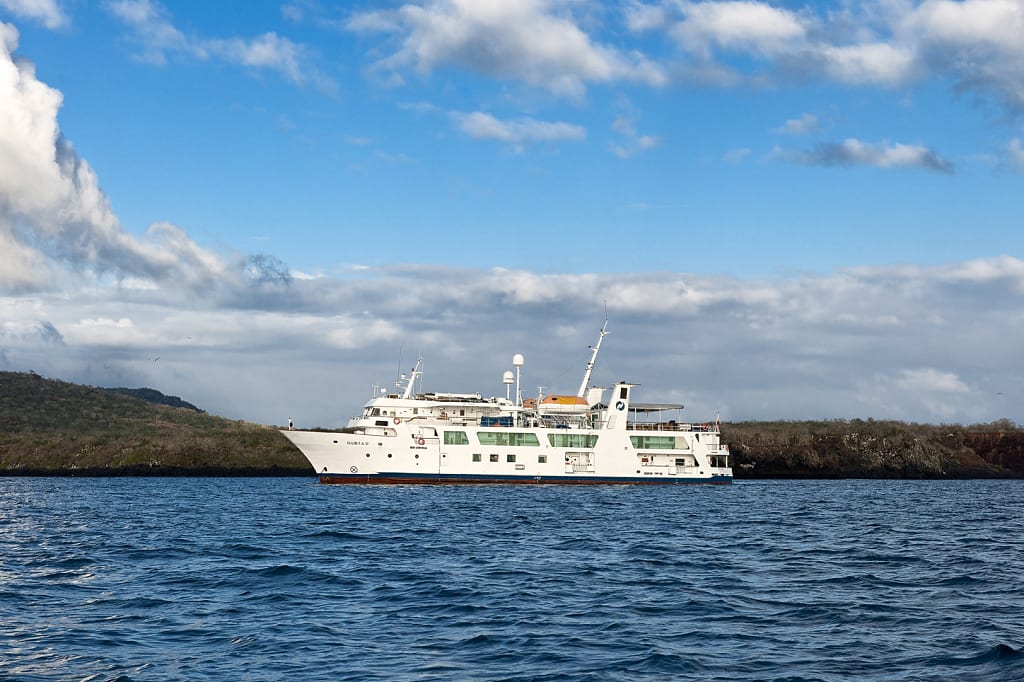 The best time to take a cruise around the Galapagos Islands is between December and May. A Galapagos cruise is one of the best ways to see the variety of islands for a broad reach into the wildlife and the scenery. Once you get into the dry season, the current starts to change dramatically.  Sea conditions can be a concern for a cruise, especially if you tend to get seasick. The currents are strongest from June to September, which is excellent for viewing marine life but not ideal for an actual cruise. 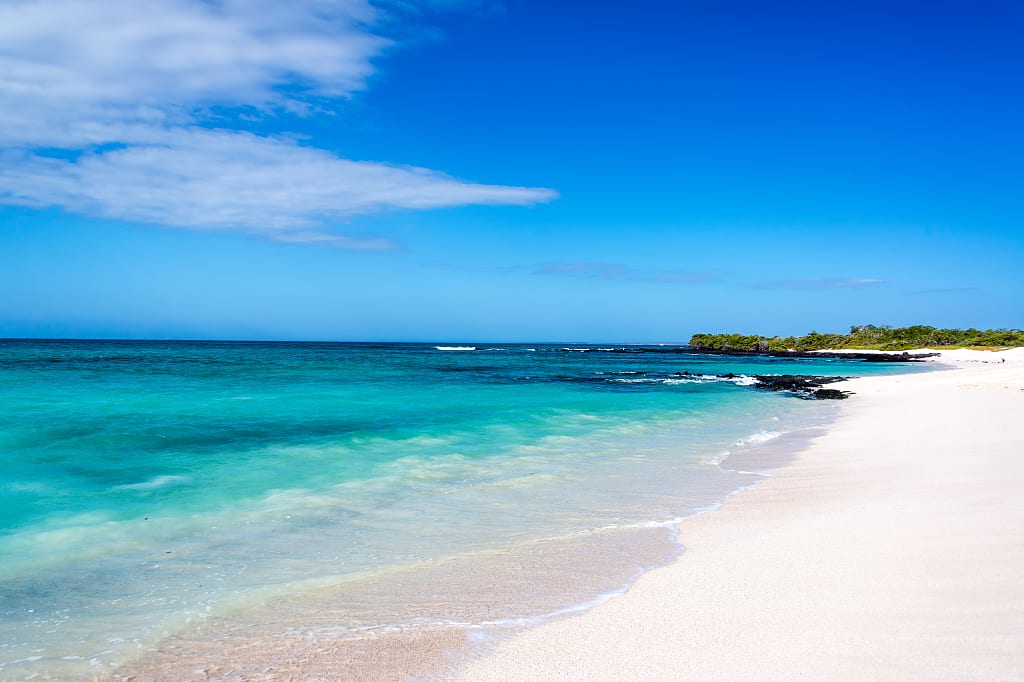 Bacha Beach on Santa Cruz Island in the Galapagos

The Galapagos beaches are not your stereotypical coastlines. The islands offer unique tropical sands perfect for a break from wildlife viewing, especially between February and May. While these months technically fall into the regional rainy season, the weather is warm, and any showers typically fall in the afternoon. 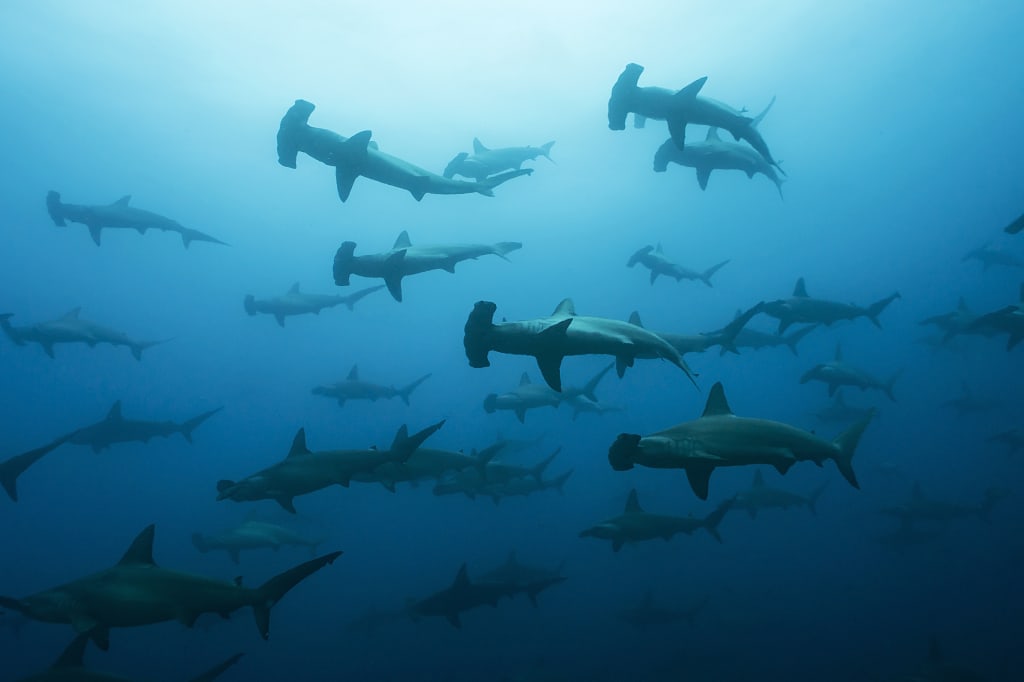 Hammerhead sharks in the Galapagos Islands

The Galapagos Islands are a fantastic destination for scuba diving throughout the year, but from June to September brim with active wildlife. Four different ocean currents connect around the archipelago bringing together tropical and temperate conditions and a variety of marine life. The currents are strongest from June to September for ideal snorkelers and scuba conditions, bringing the likes of hammerhead sharks, whale sharks, over 400 species of fish to the forefront of your maritime adventure.

Get Weekly Inspiration and Expert Advice on Travel

during the COVID and post-COVID era 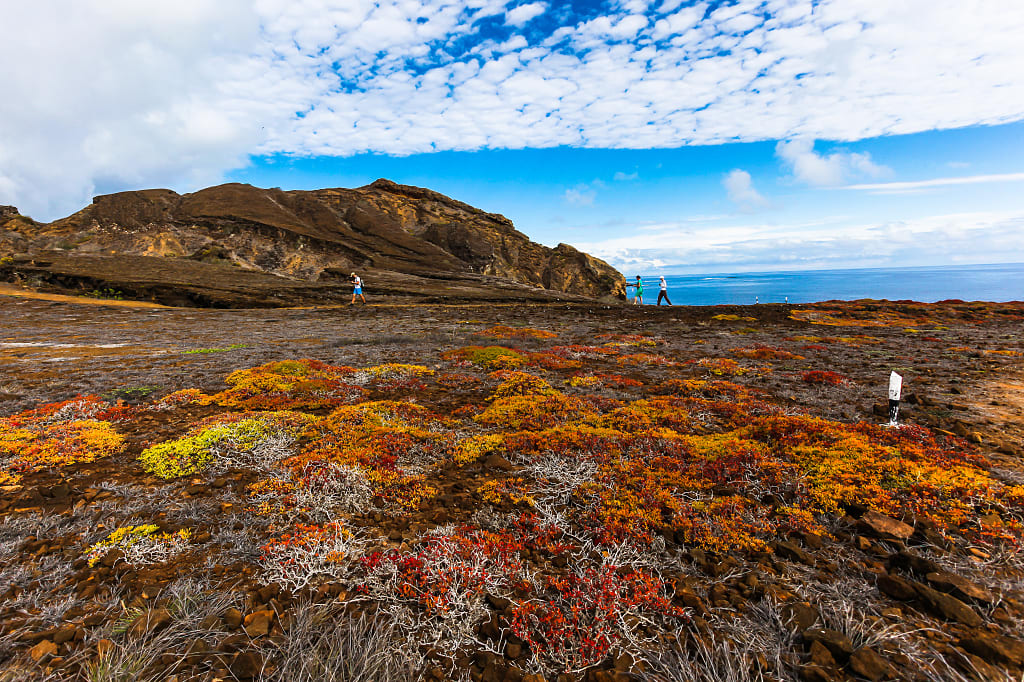 Hiking on San Cristobol Island in the Galapagos

December to May is generally the best time of year to hike in the Galapagos Islands. These months fall under the rainy season's umbrella, but in reality, showers are usually frequent but short, with the sun shining brightly on most days. Not only are the conditions tremendous, but it is also mating season for birds, sea lions, and sea turtles, as well as time for the foliage to blossom, resulting in a much livelier hike with even more for you to see. 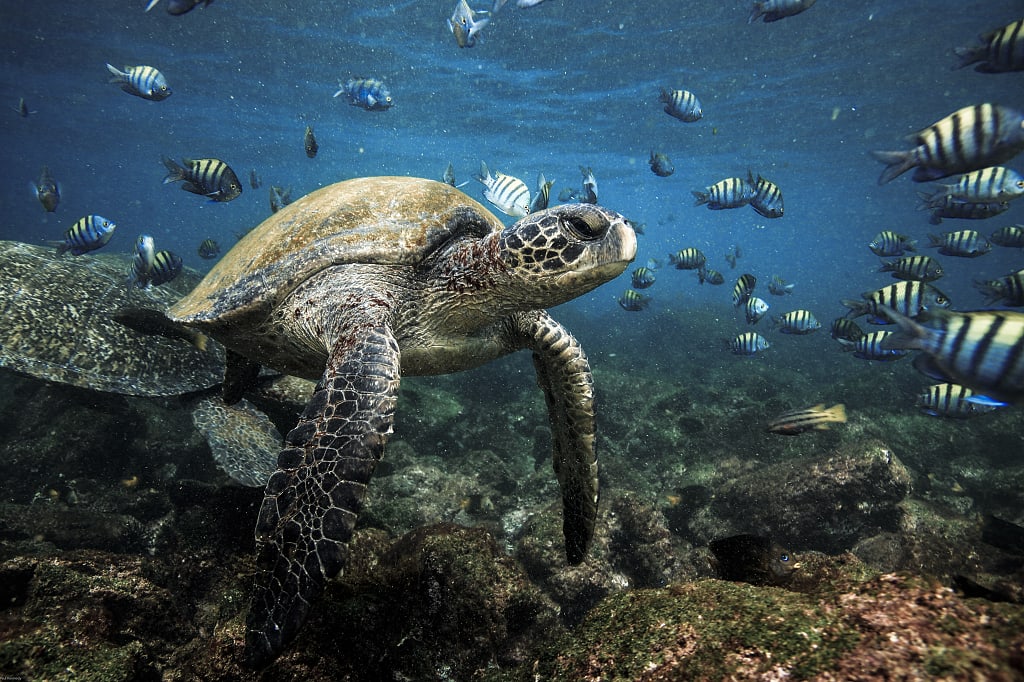 Sea turtle in the Galapagos Islands 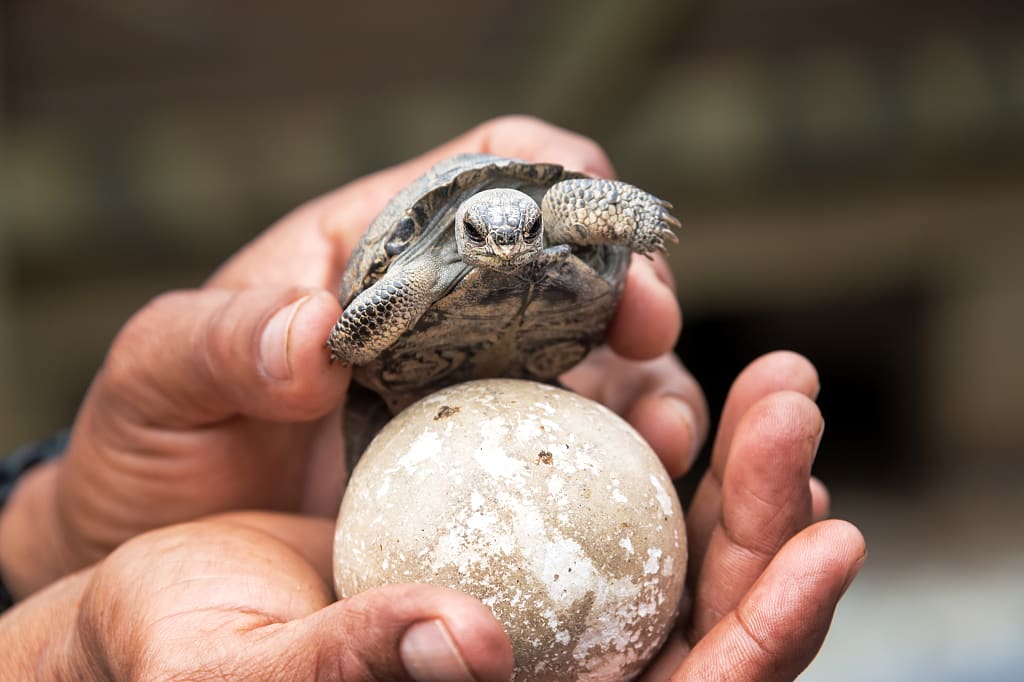 The famous giant tortoise is most active between December and January, again from April to June, and finally in August on the Galapagos Islands. The activity of the giant tortoises depends as much on the weather as on the island on which they live, with hatchings beginning in December and ending in April, as well as migrations from the highlands to the lowlands and back again in June and August, respectively. 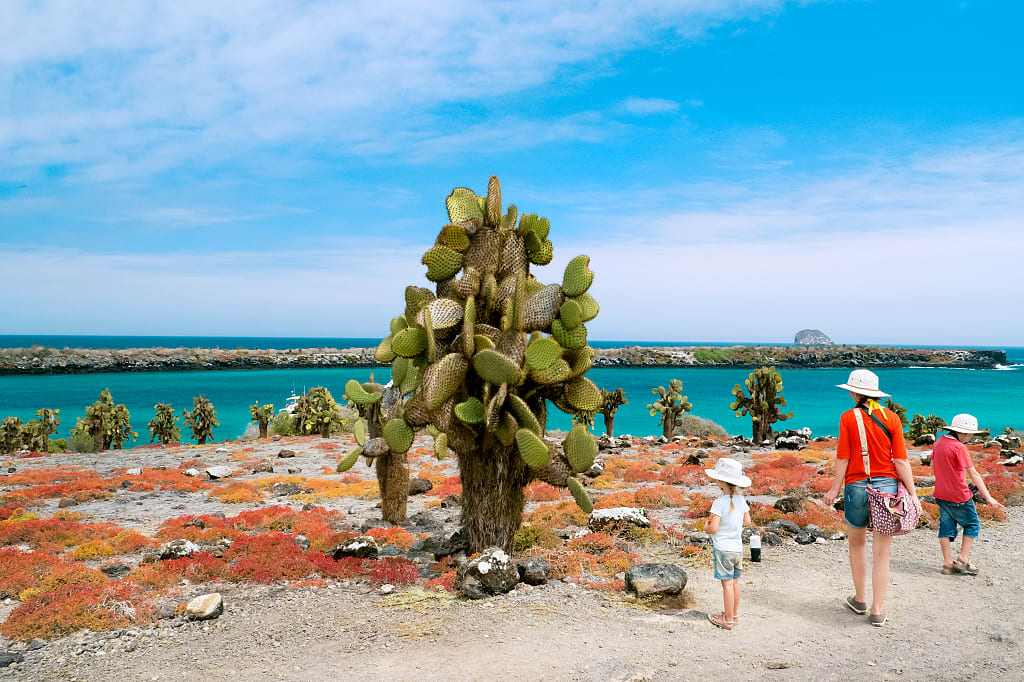 Family hiking in the Galapagos Islands

The rainy season is the best time to visit the Galapagos Islands as a family, specifically between December to May with kids ages six and up. As you take in certain considerations, like a cruise versus a land-based trip, it’s much easier to navigate the calmer water conditions in the rainy season and the warm, bright days account for a majority of the weather with typically short and scattered showers. For an even more memorable family adventure, you can visit between April or May to see the Blue-footed booby mating ritual when the birds mimic each other by hopping from one foot to the other. 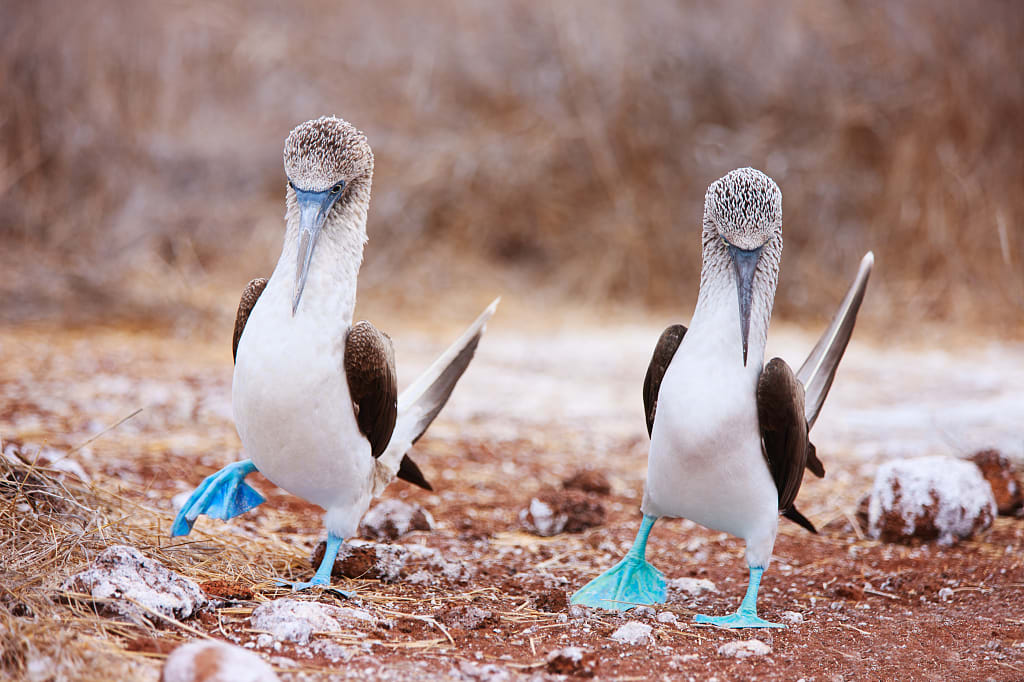 Blue-footed boobies performing the courtship ritual in the Galapagos Islands

The Galapagos Islands are ideal for couples and embody romance in their seclusion with warm, tropical weather between December to May. The warmer temperatures also signal the arrival of mating season birds, sea lions, turtles, and tortoises showing how love can fill the air in different ways, including the courtship ritual of the Blue-footed booby. Rare wildlife, the paradisiacal Pacific, and the luxurious possibilities make the Galapagos an exclusive yet charming destination for couples. 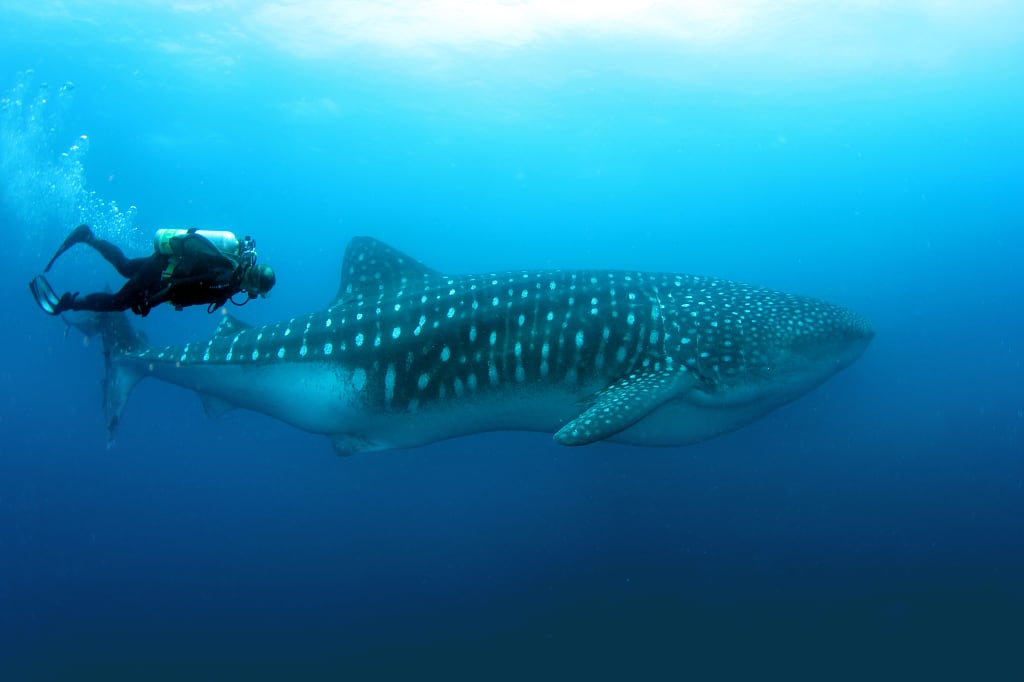 Scuba diver swimming with a whale shark in the Galapagos Islands

Visiting the Galapagos Islands during the dry season of June to November only underlines the sense of adventure and nature’s raw power.  The hot weather makes diving into the Pacific the perfect escape from the tropical heat as well as the best immersion into the underwater world of the archipelago’s hundreds of different fish species. 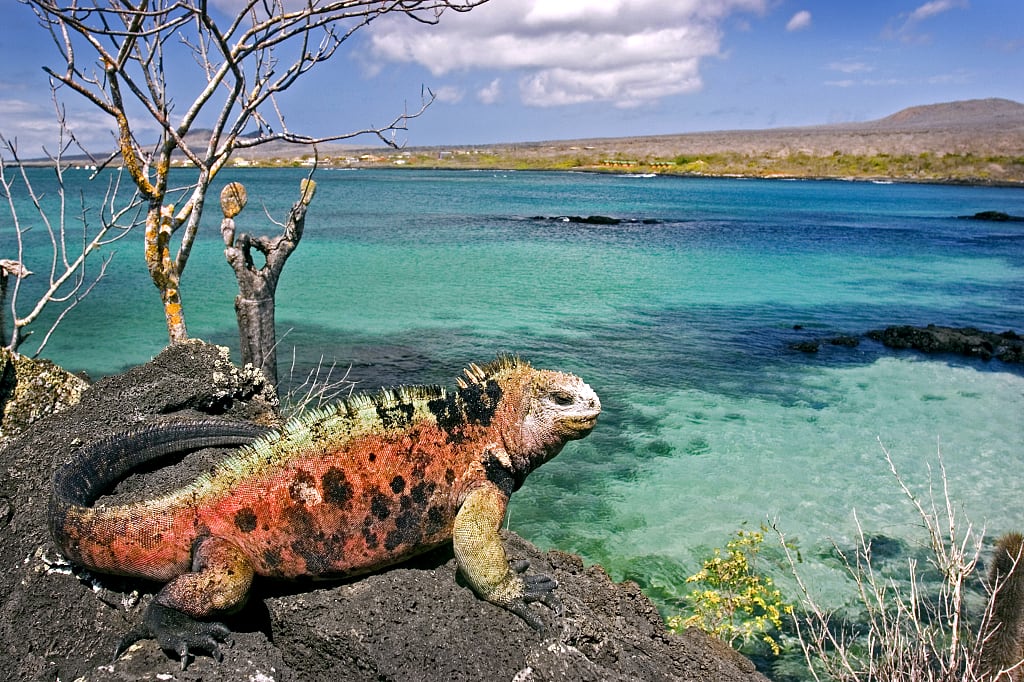 The intense sun and scattered tropical rains make the rainy season in the Galapagos Islands, December and May, a great time to dig deeper into the adventures found across the archipelago. From marine iguanas to albatrosses, rambunctious penguins to hatching tortoises, the rainy season gives you a wide variety of land and sea experiences with calm waters and generally idyllic tropical weather. 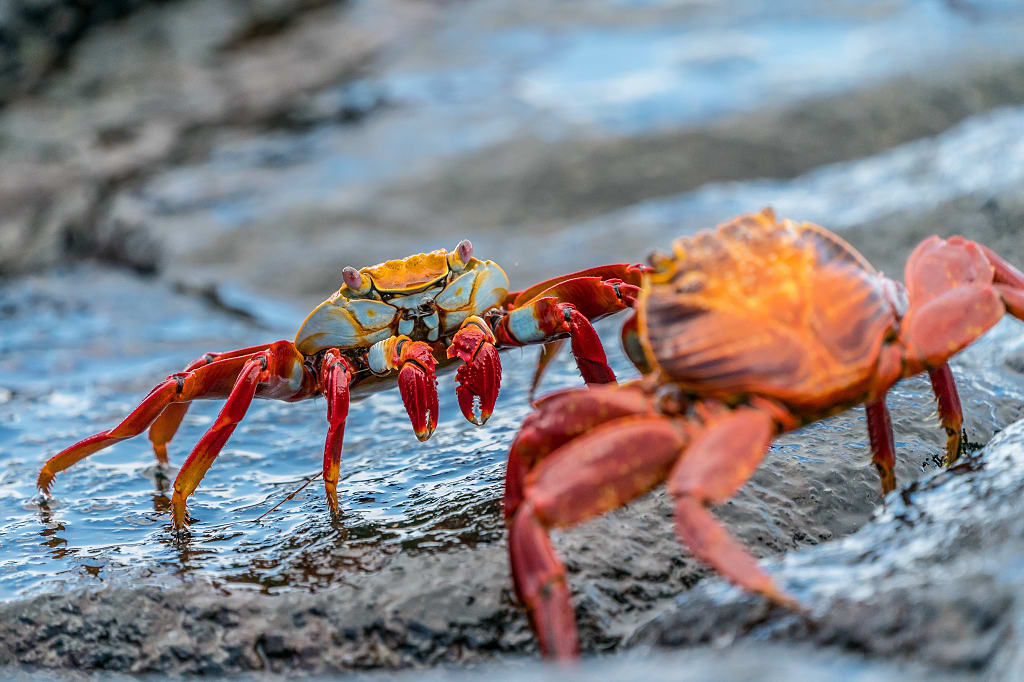 The Galapagos Islands are famous for the pristine conditions and untouched wildlife bonded to the iridescent and tropical Pacific Ocean. Knowing the best things to do will only support your best time to visit. Zicasso’s Galapagos Travel Guide has plenty of helpful tips and information for your perfect trip. You can also speak with a Galapagos travel expert by filling out a Trip Request Form or by calling our team at 1-888-265-9707.